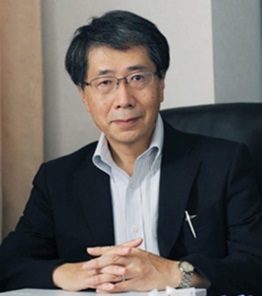 2007 Research Award of Japan Society of Powder and Powder Metallurgy

2010 The Japan Society of High Pressure Science and Technology Award

T. Irifune has been studiying the mineralogy, density, and elastic wave velocities of subducting slabs and surrounding mantle using multianvil high-pressure technology. He has been extensively working on the behaviors of pyrolite, oceanic basalt, harzburgite, marine sediments, and relevant minerals with simpler compositions based on both quench and in situ X-ray observations, to understand the composition and dynamics of the slab and the mantle. He has also been working on the application of multianvil technology to the synthesis of novel ultarhard materials, such as nano-polycrystalline diamond (or HIME-diamond), which is known to be the world hardest bulk material.

As the leader of Ehime Satellite (ELSI-ES), he particularly focuses on the chemical composition of lower mantle, behaviors of water in the deep mantle, and thermal evolution of the Earth interior etc. to provide some important constraints on the chemical composition of bulk Earth and hence differentiation and evolution processes of the solid Earth, which are vital to understand the o