Hayabusa2 samples reveal the formation and evolution of asteroid Ryugu

A team of scientists determined the origin and evolution of carbonaceous asteroid Ryugu through sample analysis and computer simulations. 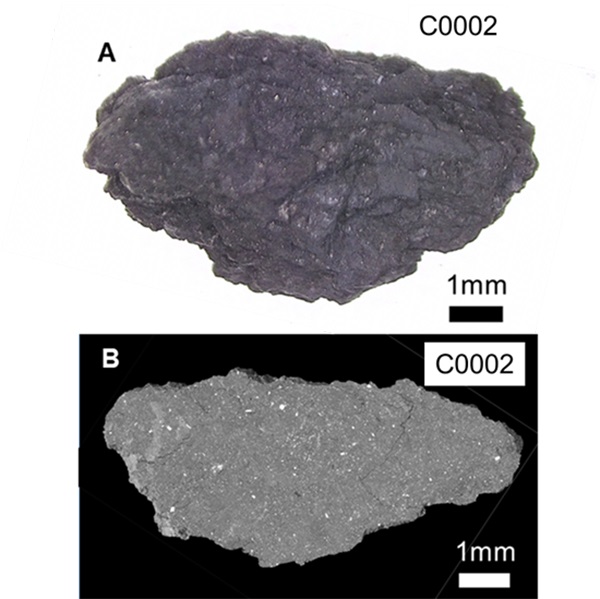 Figure 1. (A) Optical micrograph of the largest sample C0002 analyzed and (B) CT view of the interior of the sample obtained by synchrotron radiation X-ray CT analysis at SPring-8. It can be seen that the entire sample is composed of fine-grained material (gray). Credit: T. Nakamura et al. Science (2022)

A team of scientists determined the origin and evolution of carbonaceous asteroid Ryugu through sample analysis and computer simulations. The analysis of 17 particles included the third largest sample by the ‘Hayabusa2 Initial Analysis Team’ consisting of scientists from several universities and research institutes in Japan, including the Earth-Life Science Institute (ELSI) at Tokyo Institute of Technology.

The research team found that Ryugu samples contain particles such as calcium–aluminium-rich inclusion (CAI) – the oldest solid particles in the solar system – that were formed in high-temperature environments around >1000°C. These high-temperature particles are thought to have formed near the Sun and then migrated to the outer Solar System, where the asteroid Ryugu was formed. This indicates that large-scale mixing of materials occurred between the inner and outer solar system at the time of its birth.

Based on the detection of the magnetic field left in the Ryugu samples, it is highly likely that the original asteroid (Ryugy’s parent body) from which the current Ryugu descended was formed in the primordial solar nebula – which does not exist today – in the darkness of nebular gas far from the Sun, where sunlight cannot reach. Not only water ice but also dry ice (CO2 ice) existed in the region where Ryguy’s parent body was formed and at an extremely low temperature of -200oC or lower.

The research team discovered liquid water trapped in a crystal in the sample. This water was carbonated water containing salts and organic matter, which was once present in the Ryugu parent body. Crystals shaped like coral reefs were growing from the liquid water that existed in the interior of Ryugu’s parent body. In the parent body of Ryugu, the water-to-rock ratio differed between the surface and the interior, with rocks deeper underground containing more water. In the interior of Ryugu’s parent body, tabular coral-like crystals grew from liquid water, suggesting that an environment similar to the Earth’s oceans existed in Ryugu’s interior.

It was determined by measuring the Ryugu samples’ hardness, heat transfer, and magnetic properties that the Rygyu sample was soft enough to be cut with a knife. The hardness is very low compared to igneous rocks on Earth, making them soft. The samples were precisely determined by synchrotron radiation CT analysis with a spatial resolution of less than 1 micron, and the mass was measured in an environment with no atmosphere to avoid the influence of adsorbed water on the samples. The average density of the sample was 1.79 ± 0.08 g/cm3, which is much higher than the density of the entire Ryugu asteroid (1.19 g/cm3). This suggests that the interior of Ryugu contains more than 30% of pore spaces.

The sample also contained many small magnets, behaving like a natural hard disk, recording the magnetic field of the past. This structure is more stable than ordinary hard disks and can record more than 4.6 billion years of magnetic fields. The magnetic fields inside and around magnetite record the magnetic field at the time when these crystals were formed, and it is highly likely that the solar nebula (with a magnetic field) was present when the Ryugu parent body was formed.

The research team successfully reproduced the history of Ryugu, from the birth of the parent body to the disruption of the parent body via a large-scale collision using a computer. This is the first time that the results of hardness and thermal diffusivity of an actual asteroid sample are used to simulate the formation and evolution of an asteroid.

The simulations of the collisional destruction of the parent body of Ryugu show the size of the impactor that destroyed the Ryugu parent body, which is about 100 km in diameter, is at most 10 km in diameter, and that the present-day Ryugu is composed of material from a region far from the impact point. It is thought that Ryugu once belonged to either the Polarna or Eularia family of asteroid families and that all asteroids belonging to these families were formed by the destruction of Ryugu’s parent body.

“From these simulations, we found that the Ryugu parent body was formed about 2 million years after the first solid was condensed in the Solar System and then heated up to about 50°C over the next 3 million years, resulting in chemical reactions between water and rock,” said Hidenori Genda, Professor at ELSI. Genda coordinated all simulations about the origin and evolution of the Ryugu parent body and added that “the asteroid Ryugu was formed from the central part or far side of the impact site in Ryugu parent body during a disruptive collision.”

Water-bearing asteroids such as Ryugu are more widely distributed in the Solar System than water-free objects. This study shows how such asteroids formed, evolved, and were collisionally destroyed to their present form in the low-temperature region outside Jupiter, far from the Sun. This has provided a pathway to solutions to some of the many unresolved questions regarding the formation of the Solar System.

EDITOR: This text was adapted from the Joint Press Release by Japan Aerospace Exploration Agency (JAXA). 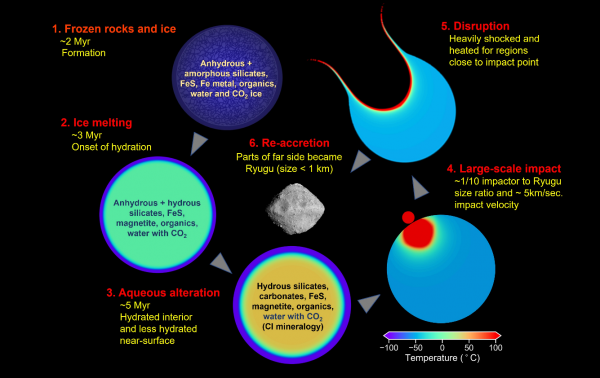 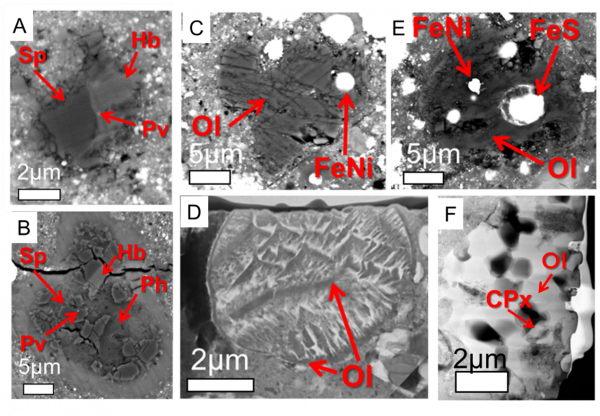 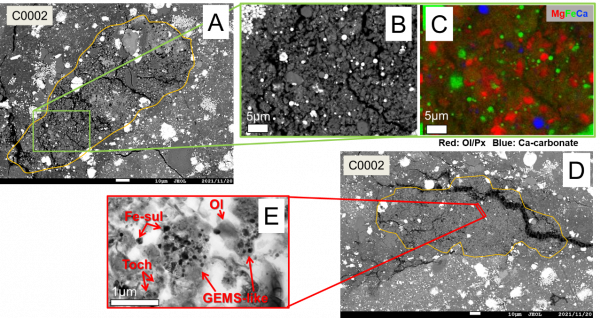 Figure 4. Rock fragments found in the C0002 sample that retain primitive features before aqueous alteration (images taken by electron microscopes). (A) Overall view of the fine-grained, porous rock fragment. (B) magnified view of a portion of the rock fragment. (C) elemental distribution in the same area as in B. Red particles indicate olivine or pyroxene, indicating that these minerals are abundant. (D) Overall view of a fine-grained, porous rock fragment. (E) magnified view of a portion of D. The main constituents are amorphous silicate and iron sulfide particles less than 1 micron in size (indicated as GEMS -like in the photograph), and olivine (Ol). Credit: T. Nakamura et al. Science (2022) 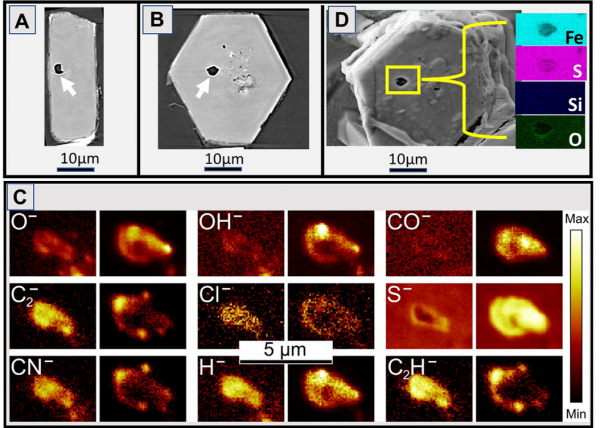 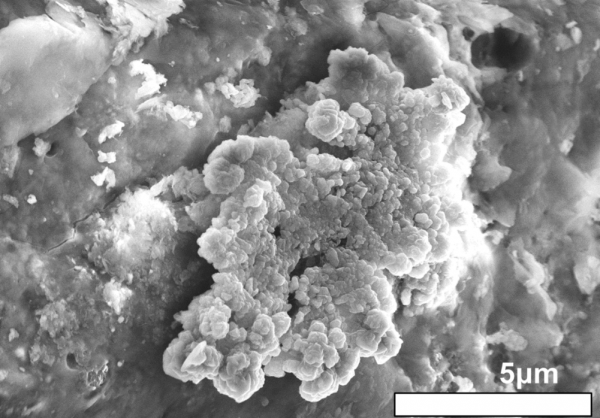 Figure 7. Paleomagnetic record remained in spherical magnetite (Fe3O4) crystals. (A) Transmission electron microscope image and (B, C) magnetic flux distribution images obtained by electron holography of magnetite cut from a Ryugu sample. Arrows and colors indicate the direction of magnetization. The concentric stripe pattern seen inside the particle indicates that the magnetic field wires wind in the direction of the arrow (called a spiral magnetic domain structure). Magnetic field wires seen on the outside of the particle are leakage fields from the particle, reflecting the magnetic field environment of Ryugu when the interior of the Ryugu parent body heated up and aqueous alteration reactions occurred. Credit: T. Nakamura et al. Science (2022)