Organics in carbonaceous chondrites (CCs) and other extraterrestrial bodies record a mixed history of Solar System chemistry and parent-body processes. Amino acids have been repeatedly observed in CCs and invoked as key prebiotic molecules involved in the origin of life on Earth and possibly elsewhere. Research led by a team at Earth-Life Science Institute (ELSI) discovered a chemical process that can explain the very low amino acid abundances in aqueously altered carbonaceous chondrites, shedding insight on the early chemical evolution in Solar System bodies. 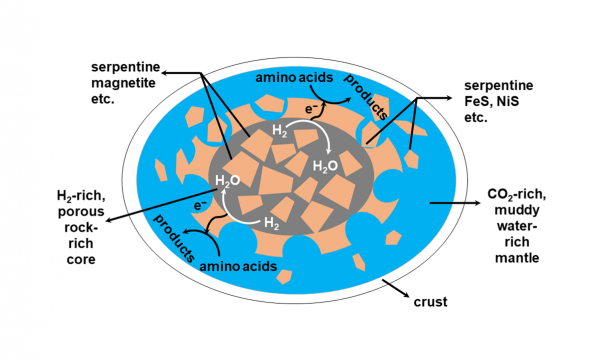 Figure 1. Model of geo-electrochemical alteration of amino acids induced by water-rock interaction in icy planetesimals (a parent body of CCs). A difference in the water/rock mass ratio (W/R) between the core (grey) and mantle (blue) leads to gradients in pH and redox. In a porous, rock-rich core with a low W/R ratio (<1), the fluid is buffered to alkaline (pH 9~13), with serpentine and magnetite as the dominant minerals. The fluid contains abundant H2, which serves as an electron source. Oxidation of H2 to proton/water generates electrons which transfer through electrically-conductive minerals and trigger the catalytic, reductive alteration of amino acids at the interface of sulfide mineral and the fluids in the muddy, water-rich mantle. Credit: Li et al., Nat. Comm. 2022

Carbonaceous chondrites (CCs) are among the most primitive material in our Solar System. Organics such as amino acids are ubiquitously found in CCs and have been invoked to serve as life’s important building blocks to promote the origin of life on Earth and possibly elsewhere. Meanwhile, the chemical diversity of amino acids records the chemical evolution events prior to and after the accretion of their parent bodies. In the past decade, the advancement of analytical instrumentations, an increasing supply of samples from various CC subgroups, and the development of a more accurate petrographic classification system of CCs have facilitated the study of how parent body processes have shaped the organic distributions.

However, there is a large discrepancy between experimental results and meteoritic records. Previous studies show that amino acids can be synthesised in an aqueous solution containing primordial molecules, suggesting that amino acids would have accumulated upon extended aqueous activity. Nevertheless, amino acids are found to be depleted in more aqueously altered CCs, pointing to a potential “Water Paradox”. To solve this problem, recently, a team of ELSI researchers, Yamei Li, Yasuhito Sekine, Hiroyuki Kurokawa, Yuko Nakano, Kristin Johnson-Finn of Rensselaer Polytechnic Institute (ELSI research scientist at the time of the research), and Norio Kitadai of Japan Agency for Marine-Earth Science and Technology (JAMSTEC) have discovered a new low-temperature geo-electrochemical process to solve the “Water Paradox.” They proposed a new molecular descriptor of aqueous alteration degree.

The team proposed a new geo-electrochemistry model based on the redox gradient that could be generated via water/rock interaction (Fig. 1). H2 gas, generated through water/rock interaction, serves as the electron donor to drive the geo-electrochemical alteration of amino acids at the interface of mantle fluid and minerals. The team found that three model amino acids (glycine, alanine, and valine) were decomposed to their amine and hydroxy acid analogues, and both of these two compound classes were found to coexist with amino acids and enriched in heavily aqueously altered CCs (Fig.2). The iron and nickel sulfide minerals serve as the key catalysts and are also present in CCs. Researchers have utilised an eight-channel electrochemical reactor to study the reaction kinetics variations depending on varying redox conditions and catalysts.

This study opens a new step into understanding the organic evolution of the Solar System’s icy bodies. Researchers have proposed that the geoelectrochemical-alteration of amino acids might be the origin of derivative organics and relevant molecules found on the solar system icy bodies, which can be tested with future in situ exploration missions for Ceres, Enceladus, and other icy bodies. The model and results also have the potential to help us understand the geochemical processes occurring on the samples collected from Ryugu asteroids recently by Hayabusa 2 mission. 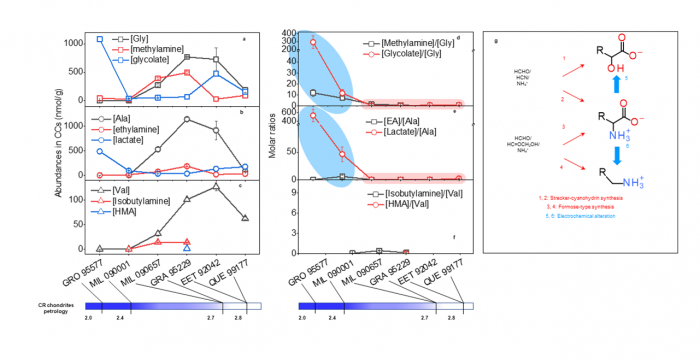 Figure 2. Alteration-dominated versus synthesis-dominated features based on the organic distributions of amino acids, amines, and hydroxy acids in CR chondrites. The molar abundances of glycine, alanine, and valine and their structurally related amines and hydroxy acids were plotted in a, b, and c, respectively. The abundances and the CR chondrites petrology depicted at the bottom were sourced from a recent report (Aponte et al. MPS 2020,). An increased aqueous alteration degree was indicated by the increasing darkness of the blue color at the bottom bar. d, e, and f plotted the molar ratios of amine/amino acid and hydroxy acid/amino acid among glycine-, alanine-, and valine-related compounds, respectively. g schematically depicted the reactions for synthesising amino acids (processes 2 and 3), amines (process 4), and hydroxy acids (process 1) in low-temperature, aqueous media (red arrows) and the electrochemical processes for altering amino acids into hydroxy acids and amines (blue arrows, processes 5 and 6). Abbreviation: HMA: 2-hydroxy-3-methylbutyrate. Credit: Li et al., Nat. Comm. 2022