All modern organisms fall into two classes, eukaryotes and prokaryotes. Eukaryotes (from the Greek meaning “true kernel”) have a cell nucleus that harbours most of the cell’s genetic information and includes organisms such as humans, plants and fungi. In prokaryotes, the cell’s contents, including its genetic material, are diffusely distributed. Eukaryotes typically have much larger genomes, which is generally thought to relate to their greater complexity: indeed, all multicellular organisms are eukaryotes. Prokaryotes, however, not to be outclassed, comprise the bulk of Earth’s biomass. Generally speaking, prokaryotes seem to approach the process of living by making copies of themselves as quickly as they can, while eukaryotes survive by being highly specialized at making copies of themselves in particular ways.

A new study by a team of scientists including researchers at the Earth-Life Science Institute (ELSI) at Tokyo Institute of Technology, Research Institute for Interdisciplinary Science (RIIS) at Okayama University and Nagoya University may have identified a key intermediate in the transition from prokaryotes to eukaryotes.

Most prokaryotes have single circular genomes and reproduce asexually, which means when the time comes for their cells to divide, they simply have to copy their circular genomes and make sure one circular copy ends up in each daughter cell. In contrast, eukaryotes typically have multiple linear chromosomal genomes and often reproduce sexually, meaning they have to make sure an appropriate set of multiple copied chromosomes ends up in each daughter cell. This is a much more complicated process, and it remains unclear how the precise sorting required for this process arose from the simpler system used by prokaryotes.

In prokaryotes, typically, the circular chromosome becomes attached to the cell membrane, and then as the cell grows and begins to separate into two cells, this attachment assures that one copy will end up in each daughter cell. This process is much more complex in eukaryotes. In eukaryotes, a complex protein scaffolding forms, mainly based on the protein tubulin. Tubulin forms long fibres, which help draw the copied chromosomes towards the poles of the dividing cell. Failures of this process, called nondisjunction, result in unequal numbers of chromosomes being present in daughter cells, which gives rise to disorders collectively known as aneuploidy. In humans, this leads to numerous recognizable birth defects, perhaps most notably Down’s Syndrome.

How the processes arose that allowed eukaryotic cells to precisely segregate chromosomes have been a mystery for some time. Prokaryotes produce a protein similar to tubulin, but rather than helping move chromosomes about, it helps pinch off the daughter cell from the parent. This protein is known as FtsZ.

When prokaryotes and eukaryotes split is yet another evolutionary mystery, this split is generally believed to have occurred ~ 1-2 billion years ago, but recently a group of organisms that appear to be evolutionarily intermediate has been identified. These organisms are known as the Asgard archaea, whose name references Norse creation myths. A team of scientists, including Caner Akil and Kosuke Fujishima of ELSI, has now identified a protein similar to eukaryotic tubulin in the genome of an Asgard species isolated from the hot spring waters of Yellowstone National Park. 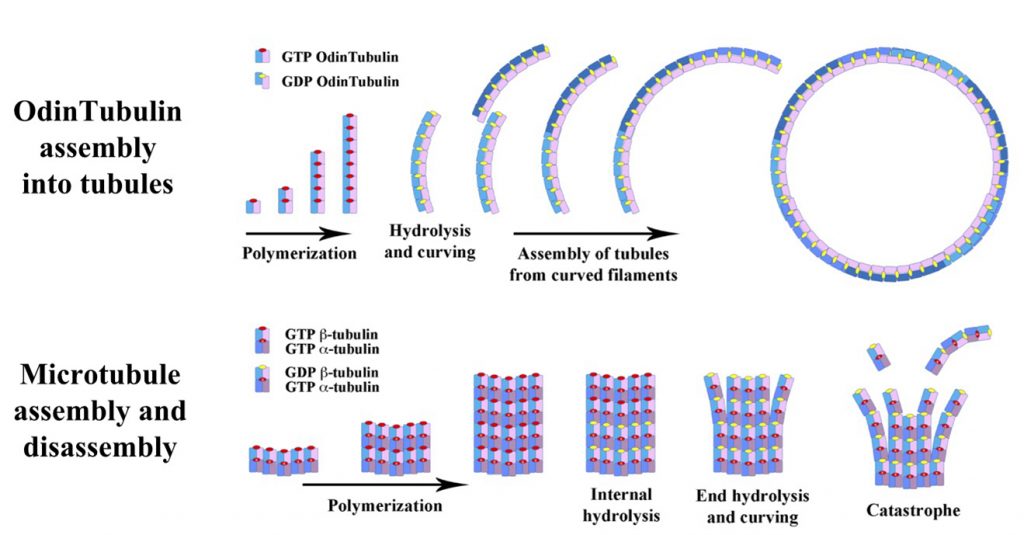