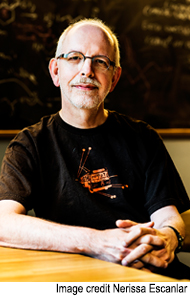 My background is in astrophysics and before that in particle physics.
Much of my research has involved large scale simulations in stellar dynamics, especially that of star clusters. This resulted in a text book that I have co-authored with Douglas Heggie, The Gravitational Million Body Problem (Cambridge Univ. Pr. 2003). With Jun Makino, I have written an educational web site about introductory stellar dynamics, the Art of Computational Science (http://www.ArtCompSci.org).

Continuing the work on tidal interactions by George Darwin, the son of Charles Darwin, I derived analytic expressions for the evolution of stars and planets under tidal interactions. These are currently widely used for the study of exoplanets. Especially useful is the notion of pseudosynchronicity that I introduced in my earlier work.

I have also worked in broadly interdisciplinary research, starting with my work in astrophysics and particle physics in 1977, well before the term “astro-particle physics” was coined. Between 1984 and 1991, I published a number of papers on the connections between planetary dynamics and mass extinctions, in collaboration with geologists, paleontologists, chemists, nuclear physicists and others.

From 1994 on, I have organized a large number of small informal workshops that were even more broadly interdisciplinary, at the Santa Fe Institute, Stanford, Amherst College, and other places.

The Kira Institute (http://en.wikipedia.org/wiki/Kira_Institute) was established in 1997 to coordinate some of these activities.

In 2001 I returned to the topic of mass extinctions, this time with the aim not only to study it, but to prevent it from happening again, were possible. In that context, I was one of the founders of the B612 Foundation (http://en.wikipedia.org/wiki/B612_Foundation), which has become the first non-profit non-government organization to plan to launch a scientific satellite to provide early warning for asteroid impacts (http://en.wikipedia.org/wiki/Sentinel_(space_telescope)).

In 2002 I became the Head of the Program in Interdisciplinary Studies at the Institute for Advanced Study in Princeton. In 2012, I became a Principle Investigator of the WPI proposal in Japan that led to the foundation of the Earth-Life Science Institute, ELSI. Since then, I have shifted my main research focus to the study of the origins of life, with an emphasis on universal life aspects, where life is seen as the best example we currently know of truly complex systems.