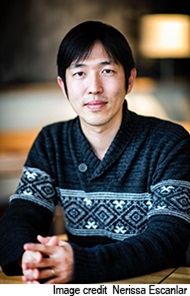 The origin of life remains one of the fundamental questions in modern biology. The mystery lies in how the transition was made from the prebiotic world of inanimate chemicals to the Central Dogma-based biological system. At the heart of the issue is how RNA chain and polypeptides arose from the chemical disequilibria, interacted, and ultimately led to a functioning biological system. I had been working on transfer RNA, known as the molecular fossil that decodes genetic information on a nucleotide chain to an amino acid. In other words, tRNA is a molecule that bridges the gap between the generally accepted RNA world (RNA based biological system) and modern biology. Most attempts to understand the origin of life so far focus on RNA and hardly any work has been done on synthesizing abiotically produced short peptides that are likely existed earlier than chain of nucleotides on early Earth, let alone extraterrestrial environments. Hence, my research is centered on testing the ‘peptide-first hypothesis’ by synthesizing a large pool of de novo peptides and proteins in an in vitro system to understand their function, evolution and heredity prior to the emergence of genetic system. These challenging researches will became part of a role model for the emerging field of “Synthetic Astr